Chrome and factory-fresh paint can certainly capture the attention of drivers as a brand new supercar or restored antique speeds down the highway. Yet, there is history in the faded glory of an old car or truck, left untouched in all seasons for the weather to take its toll. So, why do we see these old automobiles sinking in the dirt on the lawns of American homes? Perhaps that spark they ignite and the past they trigger are far more valuable than the parts and metal.

Ben joined the Navy in 1952 and served in the Korean War.
“I was in boot camp when I was drafted in the Army, but I joined the Navy because I always lived near the ocean,” Ben says.
Upon his discharge, he and his wife bought a station wagon and a small trailer, eventually upgrading to a larger trailer and a larger automobile to pull it. Ben’s 1976 Ford F-250 is home to priceless memories accumulated over countless miles since he drove it brand new off the lot of an old Ford dealership on Route 35 in New Jersey. 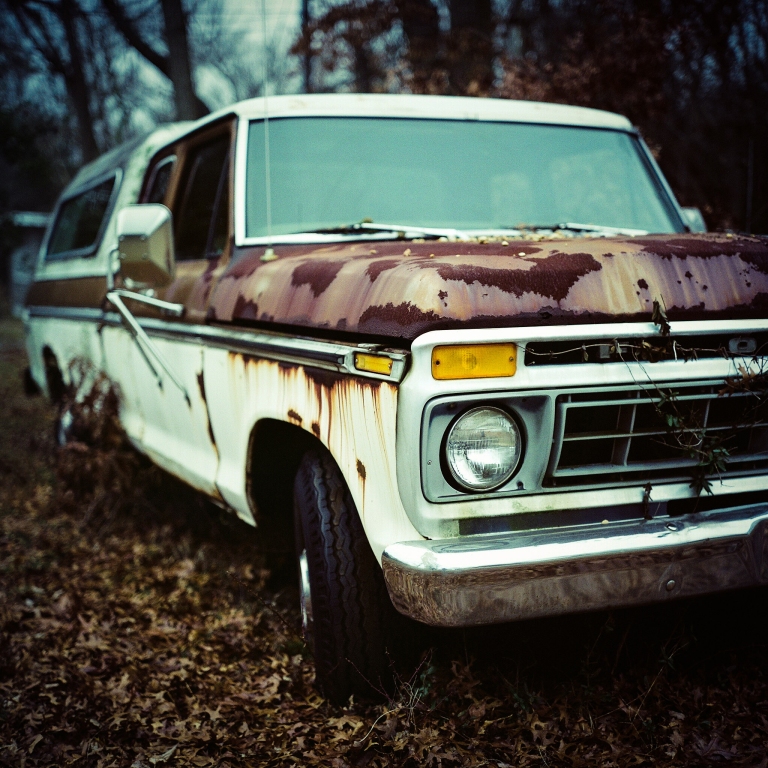 “We used to go camping and that is what we used for pulling our trailer,” Ben explains. “I had two boys at the time, they are all grown up now, and we didn’t have a lot of money, so we camped. We went to Pennsylvania. We went to Maryland. We went to Massachusetts. We used to pull a trailer with a station wagon, but we wanted to go to a bigger trailer, so we bought the pickup. It has a 460 engine in it, so we pulled the bigger trailer around with that. That was the only way we could get away and do our things, and then we decided we wanted to have a house. My wife and I went looking for a house, and we couldn’t find one, so we bought the property and built a house.”
It is on that property that Ben parked his Ford and has let it serve as a memory trigger ever since.

“People seem to have more money today,” Ben says. “I didn’t have anything. But that truck and trailer were meant for us to get away. People went away on weekends and stayed in motels. But, we had a trailer, so we went to campgrounds, and that cost at the time maybe $7. We didn’t have the money to go on vacations. This was how we got away. When my children grew up, that is when we stopped going camping. Rather than look for four-legged deer, they went out looking for two-legged dears. Now, it’s all about my grandchildren. I’m 83-years-old. I’ve been married for 50 years. I have a lot of good memories. I don’t think I ever fought with my wife. I don’t think the Sun ever set on a fight. I have no qualms. The point is, I am happy. It is a good life when you find the right woman.”

“I was a mechanic,” Ben says. “That was my job years ago, so as far as rebuilding engines, I can still do it today. Everything is original on it. That’s the way I bought it. I’m going to build a bigger barn and repair that truck. A friend of mine is going to help me and I am going to redo it until the day I die so that when it is fixed, I can pass it on to my children. You’ll see it going down the road someday.”
Ben’s stories are examples of the idea that life is what you make it. He is happy and while his old truck may be collecting rust, it is responsible for helping him garner his own collection of stories and memories he created with his family. That is a lifetime defined by happiness.
As he puts it: “It all depends on what you want to get out of life.”