These days, if you want a hot rod or restored classic car, you can hire a shop to do all the nitty-gritty sweat work and soon enough, you will have a brand new vintage car with all the modern amenities. That is not the way of George. George wanted hot rods, so George built hot rods. He wanted modern comforts, so he added modern comforts. George lives the Do-It-Yourself lifestyle, and his rides are the pride of a life spent paving his own road.
His cars look straight out of a Hot Wheels blister pack, only full scale.

“When I got in to this hot rodding, it was called street rods,” George says. “I was just 17. I was running a Chevelle at the track in Englishtown, New Jersey. Drag racing. You’d spend all week working on the car, go out to the track, get on the line, dump the clutch and break something. Then drag it home, spend all week with your girlfriend sitting in the garage pissed off, working on the car. Go out again the next week and the same thing happens. So, a neighbor of mine said, ‘Why don’t you get in to street rodding?’ You build an old car and you put all the comforts in it. Air conditioning. Cruise control. Heat. And we go to these, what they call Rod Runs. All old cars at these gatherings and you just hang out and picnic all day and have a good time on the weekends. No competition. So, the girls loved that. During the week you’re working on the car and then on the weekend you’re going out. You eat dinner out and hang out. So, that’s what we started doing. Just driving the cars all over the country. The Street Rod Nationals in Louisville, Kentucky every year. Ohio they have them. Syracuse, New York. That’s what you did. You took trips.” 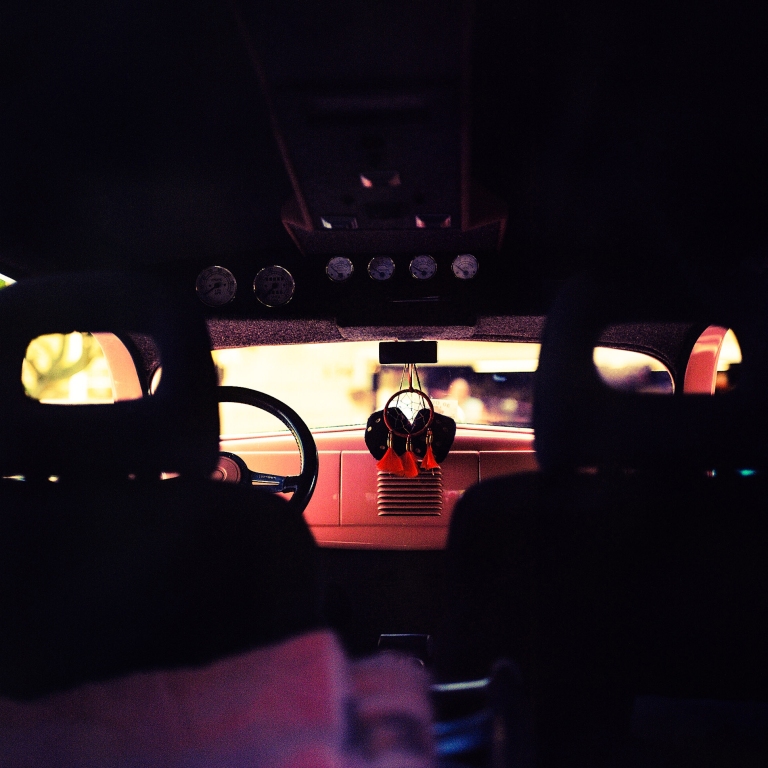 The 1937 Ford Delivery started out as a hearse before it was eventually chopped in the early 1990s, becoming the hot rod it is today.
“This car was a hearse,” George says. “It had an extra set of doors in it. I removed those doors, brought it back together, chopped the roof on it. This is on an ’82 Chevy S-10 frame.” 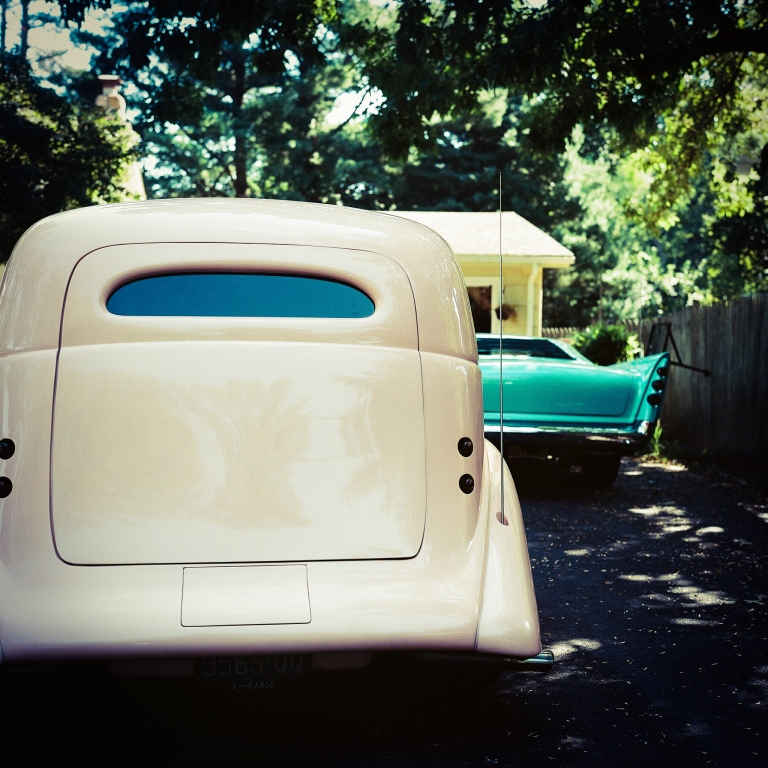 The 1957 Chrysler DeSoto was picked out of Morganville, NJ, and chopped by George in 1982. Both cars and his Harley chopper have been all over the country, all built by George himself to drive and enjoy and turn heads.

George speaks of his “toys” like one might speak of a child. After all, they are his babies. In fact, he even took his first child home from the hospital in the 1957 DeSoto.
“Thirty-some years ago, I was riding around the backstreets there in the boonies and it (Chrysler DeSoto) was sticking out behind a barn,” George recalls. “I just saw the fins. I wanted to build a custom. So I saw this thing sticking out behind the barn. I went and knocked on the door. Old dilapidated house. I said, ‘Is that car back there for sale?’ I didn’t even know what it was. It just looked neat with the fins on it. I knocked on the door and I said to the guy, ‘Are you interested in selling that car?’ He goes, ‘Well, it’s my son’s car. He’s in prison. I don’t think he’s going to get out anytime soon. Yeah. I’ll get the title. Yeah.’ I think I paid $900 for it back then.”

“This was an original Hemi car,” he says. “Now it has a 427 small block Chevy. This has a lot of power to it. Back when I built this car, I built it as an everyday car. So, trying to get parts for it, and back in ’82 was the gas crisis and long lines, so you didn’t want a gas-guzzler, so a small block was what went in it. It used to have a 350 in it too, but then I went to the 400 block. Back then, no one wanted the Hemi. I had it laying around for years and no one wanted the thing. Now, people want them. They want to restore cars to their original state. I always regretted getting rid of it. A few years ago, I wanted to put it back in the car since I don’t use it as an everyday car anymore. So, I started looking on the internet for them things, and forget it… They want as much now for the block as the cost of the car.”

“It’s such a unique car,” he says. “It draws so much attention. It’s out of the ordinary. I’ve gone to shows and I would pull up next to a guy sitting there with a Lamborghini or something, and I pull up next to him and people walk away from the Lamborghini like nothing. People would say they have seen $100,000 cars before, but they have never seen a car like this. I have had dozens of cars. I have had all kinds of hot rods and street rods and muscle cars, and my friends always ask, ‘How come you never get rid of that DeSoto?’ It’s because I have had Chevelles and street rods and all kinds of crazy stuff, and everybody migrates to this car. No matter where I go, people go, ‘What the hell is that?’ Hot-rodders migrate to this. It has a look that appeals to everybody. It is wild. It just has the look to it.”

The bike is one-of-a-kind as well. A springer front end, headlight made from a cooking pot, and a handmade frame. Much like his cars, he built his bike to ride.
“This is been up Mt. Washington,” he says. “I have the sticker stuck on the wall saying this vehicle made it up Mt. Washington. I drove everywhere on this bike. This has been to Canada. This has been down to the Keys. This has been all over. I can ride all day on this. To me, it’s all about the ride.”

George is a one-of-a-kind guy with one-of-a-kind rides. Much like life itself, he has fun with his toys. These are not collector’s items to be put on display to be seen but never touched. When the Sun or the Moon is out, the full scale Hot Wheels take the streets.
“I drive both of them constantly,” George says. “As long as the weather is nice.”